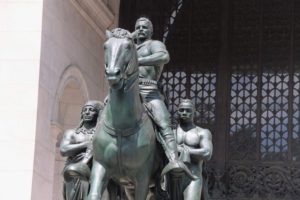 [We] have the right to express our pride in what our forefathers did, and our joy in the abundant greatness of this people.  We have the right to express those feelings, but we must not treat greatness achieved in the past as an excuse for our failing to do decent work in the present, instead of a spur to make us strive in our turn to do the work that lies right at hand. If we so treat it, we show ourselves unworthy to come here and celebrate the historic past of the nation.

The quest for national American unity animated Theodore Roosevelt for his entire life. Growing up during the Civil War, the six million dead of that war and the sectional divides that led to it were always on his mind and those of his fellow Americans during the generation afterwards.  TR was well aware of the racial and ethnic divides that also existed and, as “the man in the arena”, tried to keep those divides from creating similar divisions as much as the arena of his times allowed. Today, those racial and ethnic divisions pose the greatest threat to national unity.  The removal of the equestrian statue in front of the American Natural History Museum in New York City needs to be viewed as a gesture toward healing these divisions and achieving a modern national unity.

As shown in the above picture, the statue features Roosevelt on a horse flanked by standing American Indian and African-American figures.   It has been a flashpoint with black and Native Americans for years because the two figures at the side appear to be subservient.  The museum cited this depiction of Roosevelt as the issue and recognized his contributions as a natural historian and conservationist by renaming their Hall of Biodiversity after him. Even the Roosevelt family agrees with the decision, saying that the statue does not represent his true legacy.

The quotation above better reflects that legacy. While TR’s personal views on race were unfortunately common during his era, he also acted to promote and protect racial equality as much as a Congress made up of segregationist Southerners and conservatives would allow.  He supported the Lodge Federal Elections Act of 1890, an early form of the modern Voting Rights Act that would have protected African-American voting rights in federal elections.   As New York governor, he pushed through legislation banning racial segregation in public schools. These stands, and many similar ones, were significant accomplishments for that era.

At the same time, each generation has the right to determine who and what will be celebrated in the public domain. The removal of Confederate statues and names from majority African-American cities and military bases represents this natural transition.  However, these decisions come during a frightening time when mobs attack the legacies of not only TR, but also George Washington, Thomas Jefferson and other authors of the very rights in which those mobs claim to believe.   It is a mark of mindless extremism born of a failure to appreciate the historical context – the “arena” – that these figures lived in. The concept of equal opportunity, human rights and democratic government espoused by our founding fathers were dangerous to the elites of their time and, but for their courage, might not exist today.  We must avoid flushing those memories and accomplishments down a modern-day Orwellian “memory hole”, for that way leads to the totalitarian world we all oppose.

In a statement released today, the chairman of the congressionally-chartered Theodore Roosevelt Association put it well when he said “Theodore Roosevelt’s contributions to the United States and legacy is more enduring than any statue”.  If we concentrate on the positive aspects of that legacy and those of other American heroes, we will continue our common national march to the more perfect achievement of those great ideals.